T-Bird at the Golf Course 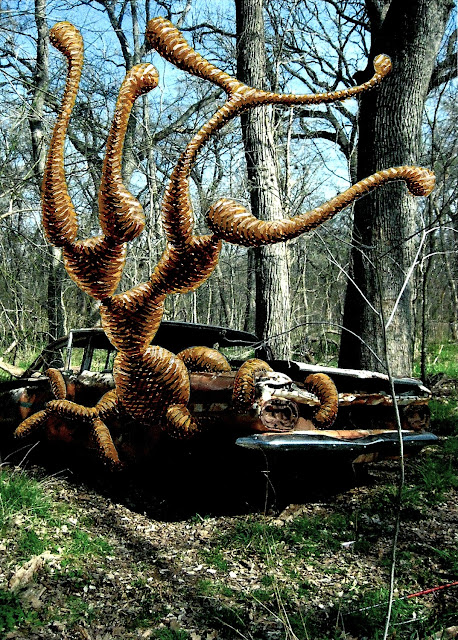 This Eye Witness Account was filed on February 19, 2013 by Mr. Thomas T. Thorn of Springfield Ohio.
I took this picture with my iPhone. It was the most bizarre thing I'd ever seen.

My city is very proud to have converted the old stinky trash dump on the south side of town into a world class golf course. After the hoopla of the ribbon cutting, anybody that could swing a golf club (myself included) was out there ripping up the green. To put it frankly, it was down right dangerous, what with golf balls flying every which way. I think more than a few people ended up at the Nabisco County Hospital after being hit by a stray ball.

Now I'm not much of a golfer to start with and having to wait at every green to tee up gave me a bit too much time to pop another beer. So, some of my shots might have been a bit wild too, but I swear I never hit anyone. Most of my wild balls were worm burners that ended up in the drink. By the tenth hole I was down to my last ball. When it went flying off into the poison ivy choked woods I knew I had no choice.

Using my putter as a machete I made my way into the jungle. About fifty yards in I saw this old junked car. I think it was a T-Bird. But what really caught my attention was this weird plant growing out of it. Some kind of toad stool, except it was really big. Like over my head big. It kind of gave me the creeps.

When I got back to the putting green my friends were so drunk that we just called it a day. Over the next week as I scratched at my rash blistered skin, I thought about that car and decided I would go back and take another look. But when I got there the toad stool was gone. Judging by all the empty shotgun shells scattered about, I figured some kids must of shot it to pieces.