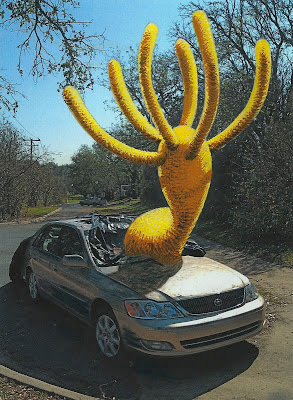 On June 12th, 2012 baseball sized hail rained down on our house for over 30 minutes. Nothing in the Lakewood area escaped damage. Houses, trees, cars ... simply everything in the neighborhood was pulverized. Here's a few video documents of hail storm: Jeff Mailey,  Robcat2075

Earlier that week, I was riding high because I had just bought a new car.  Well, it was a new car to me. And since I paid cash, I didn't have to pay full auto insurance coverage. I could get by with just the state required liability coverage. That would save me hundreds of dollars! I was bragging to all my friends about how I was beating the system and sticking it to the man. Then the hail storm came.

Just a few pea sized pellets at first. The kind that make you think about maybe moving the car.  I was just pulling my coat out of the closet when the big boys started coming down. The noise was incredible. My wife and I just stood there frozen. That's when the dining room window shattered. Then the skylight above us exploded. We were instantly covered in glass and rain water.

Screaming and yelling, we ran around the house like crazy people.  Afterwards, we nailed planks of wood and sheets of cardboard and blankets over the smashed windows. Sixteen windows in all. I didn't even know we had sixteen windows in the house.

As for my new car, it was reduced to a pile of rubble. Every inch of it was dented. All the windows were gone. Even the seats had big holes in them. I scrounged up a black tarp, threw it over the car and went back into the house.

Over the next few months, all of our energy, time and money went into getting the house repaired. We were both brown bagging it for lunch, and I was taking DART (public transport) to get to work. As the carpenters, glaziers and roofers each completed their tasks, our lives settled back to normal and I finally felt like facing my car.

When I stepped out the back door of our house I was expecting the worse. I wasn't expecting a ten foot tall mushroom! It was growing from the interior of the car, through the front windshield and up into the sky. It had to be at least ten feet tall. There were a half dozen thick tubular branches sprouting from the top, and the whole thing was covered in a golden brown velvet. It smelled like omelets.

I was dumbstruck. I mean this was definitely more than what a normal neighborhood body shop could handle. Who do you call? A body shop, a mechanic, an arborist? I just started calling anybody I could think of. After about 12 or 13 calls I realized I sounded a bit deranged, and that people were starting to hang up on me...

It was a few days later that I stepped out the back door again, and the F***** car was gone! Completely gone. Not even an oil stain on the driveway. The whole area looked like it had been raked, scrubbed and vacuumed clean. I screamed and cussed and kicked over the patio furniture... then I turned around and went back inside.

So, with my car now missing and no funds in the bank for a new one. I am still brown bagging it for lunch and taking DART to work. On the bright side, using public transit gives me more time to read, which is how I came across the Nomadic Fungi Institution. Any chance you guys can help me find my car?
No comments: