The Wobblers Encyclopedia of Parasitic Fungi

The Wobblers Encyclopedia of Parasitic Fungi was compiled by Mr. Rotifer H. Wobbler and published in 1959. It is internationally recognized as the primary resource for information pertaining to parasitic fungi. Unfortunately, Wobblers had a very short run of only 200 copies, thus it was never widely distributed beyond the world of academia. Today, due to its scarcity and value, most copies are kept under lock and key at corporate bio labs or a few select universities.

Mr. Wobbler's interest in unusual botany began as child when he received a Venus Flytrap as a Christmas present from his Uncle Eugene. Under the care of the young Mr. Wobbler, the Venus Flytrap thrived on a steady diet of house flies and the occasional dollop of ground meat.

While attending Laramie Middle School, the young Mr. Wobbler became enthused with entomology. Of particular interest were the very aggressive fire ants found on the school playground. With the use of a magnifying glass, the young Mr. Wobbler spent hours observing their habits. Then one day he saw an ant dangling from a blade of grass just above the mound. This ant appeared to have long horns growing from its back. The next day there were more of these ants. Soon it appeared that most of the colony was dangling from blades of grass, each sprouting horns. By the end of the week, the mound was completely still, surrounded by dangling dead.


Completely dumbstruck, the young Mr. Wobbler was determined to discover what had happened to his beloved ant colony. He began a flurry of letter writing, reaching out to any person or institution that had anything to do with entomology. Six months later he received his answer: Cordyceps, a type of fungus that uses a parasitic stratagem to propagate.

This answer opened up a whole new world to the young Mr. Wobbler, a world that quickly became an obsession and the foundation for his life long master achievement, the publication of The Wobblers Encyclopedia of Parasitic Fungi.

A Word From Our Distinguished Director

My first encounter with a Nomadic Fungus was very typical of most first encounters, I simply didn't know what I was looking at. I assumed it was some sort of large plant, perhaps a cactus. It looked very strange growing from the rusted hulk of an old car, but given that I was hopelessly lost in the rock strewn desert of southern New Mexico, I had more pressing issues to contemplate....

It would be another twenty years before I discovered that what I had stumbled across was a Nomadic Fungus, a mutated mushroom from the cordyceps genus. Out of pure amusement I did a little more research, but strangely there wasn't much out there. No scientific papers. No government sanctioned research. No PBS specials. 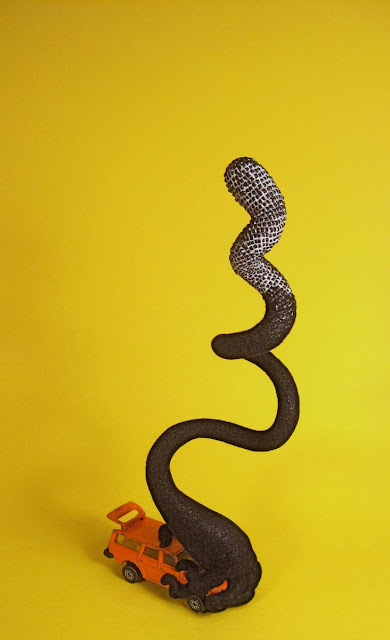 This scale model of the Midnight Nibblet fungus attached to a 1974 Volvo 245DL is based on photographs sent to the Nomadic Fungi Institute.

Although no cases have yet been officially verified or acknowledged by the U.S. government, rumors of giant fungi growing from automobiles began to circulate in the 1950s.

The original Midnight Nibblet photographs were estimated to have been taken around 1981, but they remained stashed away in a shoebox until May of 2012 when they came to light during the family estate sale.

The Nomadic Fungi Institute recognizes that today's economy is built upon a vast transportation network and that the existence of a parasitic fungus feeding upon automobiles imposes a serious threat to all humanity.